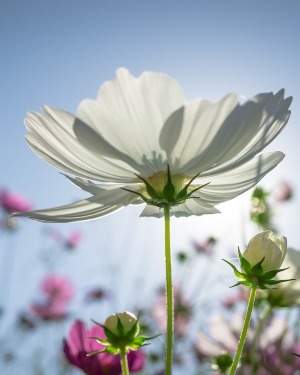 Funeral services for Rose E. Owens, 87, of Frankfort, will be 1:30 p.m. Friday at LeCompte Johnson Taylor Funeral Home with burial to follow at Sunset Memorial Gardens. Robert Roach will officiate. Visitation will be from 11:00 a.m. until the service time on Friday at the funeral home.
Rose died Wednesday morning at Signature HealthCARE at Heritage Hall in Lawrenceburg. A native of Frankfort, she ran a daycare out of her home for nearly thirty years and went on to work for the Kentucky State Department of Revenue for twenty-five years before retiring. She was a member of Holly Hill Church of Christ, and a former member of the T.O.P.S. Club, and the Senior Citizens Center. Rose loved spending time with her grandchildren and her dogs and enjoyed crocheting as well.
Daughter of the late Bertha Huckle and John Morrow, Rose is preceded in death by her husband, JW Owens, four sisters, and one brother. She is survived by her sons, Tom (Cora) Owens, and David Owens; daughter, Donna (Steve) White; grandchildren, Adam and Tyler Owens, and Donald (Ali) and Jody (Brenda) Hughes; great-grandchildren, Connor and Jayson Owens, and Kaia Hughes; sister, Patricia (Manson) Waldridge, and several nieces and nephews.
Pallbearers will be Adam Owens, Tyler Owens, Donald Hughes, Jody Hughes, Steve White, and Tracy Waldridge. Memorial contributions may be made to Bluegrass Care Navigators, 643 Teton Trail, Frankfort, KY, 40601; the Alzheimer’s Association, Greater Kentucky and Southern Indiana Chapter, Kaden Tower, 6100 Dutchman’s Lane, Suite 401, Louisville, KY 40205; or Holly Hill Church of Christ, 1020 Holly Hill Drive, Frankfort, KY, 40601.