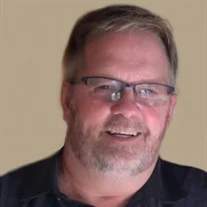 Ronnie Llynn Tingle, age 56, passed away peacefully on Tuesday, August 24, 2021. Services will be held at Harrod Brothers Funeral Home on Tuesday, August 31, 2021, at 10:30 a.m. with Pastor Steve Rose officiating. Burial will follow at Sunset Memorial Gardens. The family will receive friends at Harrod Brothers Funeral Home from 3:00 p.m. until 7:00 p.m. on Monday, August 30, 2021.
Ronnie was born in Shelbyville, Kentucky, on February 14, 1965, – the busiest day of the year in the floral business. He served the Frankfort community for 36 years as the manager and part-owner of Tingle’s Riverview Florist. He enjoyed visiting with customers but mostly loved spending time with his family – especially his grandkids. Though the florist shop and his family were his top priorities, he was a gun and Mustang car enthusiast in his spare time. Ronnie had a warm, genuinely kind spirit that brought a smile to most anyone he met. He will be remembered for his kindness, and as a wonderful husband, father, son, Pops, brother, and friend.
He is survived by his beloved wife, Judy McLean Tingle; children, Brandon Llynn Tingle (Liz), Ryan Lee Tingle (Jess), and Kacie King (Zach); father, Jodey Lee Tingle; his twin brother, Donnie Tingle (Bridget), brother, Timmy Tingle (Vicky), and sisters, Sandra Gayle Dockery and Robin Stigers (Brian). He was also blessed with his cherished grandkids, Remington Tingle, Tobias Tingle, Izabella King, and Walker King, and by several nieces and nephews.
Ronnie was preceded in death by his mother, Margaret Evelyn Eades Tingle and by his grandson, Rowan Tingle.
Serving as pallbearers will be Brad Snyder, Luke Snyder, Dale Southworth, Gavin Benassi, Kris Perry, James Holland, Kevin Wells, Rick Snyder, and Chandler Southworth. Honorary pallbearers will be Mark Jackson, Jerry Boone, Ron Gordon, David Fallis, Bill Ballinger, R.L. Hall, and Kevin Phillips.
In lieu of flowers, expressions of sympathy may be made in Ronnie’s memory to Providence Baptist Church.
Arrangements are under the direction of Harrod Brothers Funeral Home & Crematory.