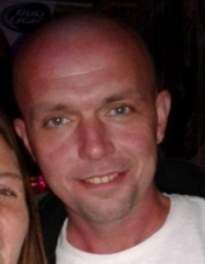 Robert S. Lewis, 38, passed away Saturday, January 25, 2020. The husband of Andrea Mattingly Lewis, Robert was born April 8, 1981 to Maybell Lewis and the late Chester Harrod in Frankfort, Kentucky. Robert loved to fish, sitting on the bank and just enjoying his surroundings was his favorite pastime. He was a lucky man, playing the lottery and winning many times over. An amazing husband, son, and grandfather, he had a huge heart and would give anyone the shirt off of his back if they needed it. Hardheaded, but good with his hands, Robert could make and do anything. He played the guitar and was a talented artist.

Robert was preceded in death by his father, Chester Harrod and brother, Billy Ray Lewis.

In lieu of flowers, the family requests Memorial Contributions be made to Clark Legacy Center to assist with the cost of funeral services.