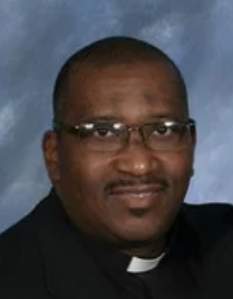 Presiding Elder James Earl “Book” Smith was born on September 10, 1959 in Greenville, Alabama; the fourth son of Robert “Jack” and Clara Belle Smith. Presiding Elder Smith, affectionately known as “Rev. Book,” grew up with his three older brothers, Earnest (Jack), William (Roy), and Van Roosevelt (deceased) in Brewton, Alabama. He and his family joined Second Saint Siloam Missionary Baptist Church in Brewton under the spiritual guidance of the late Dr. H.L. Lancaster. "Book” graduated from Southern Normal High School, a private school for African American youth. He initially went to Kentucky State to play football but had to stop due to a serious shoulder injury. After sitting out for a year, he returned to school by transferring to Alabama State University (ASU) on a football scholarship. At ASU, “Book” served as the captain of his football team during his junior and senior years. Upon graduating from college, he returned to his High School Alma Mater to teach and coach for ten years.

Presiding Elder Smith moved to Kentucky in 1987 and worked for the Whitley Young Job Corp and the Kentucky Department for Juvenile Justice. He joined Saint John African Methodist Episcopal Church in Frankfort, Kentucky, where he was an active member.

Some of the Highlights of Presiding Elder Smith’s Ministry consisted of:

2008- Pastor of the Year Award from the Kentucky Conference and 13th Episcopal District Lay Organization.
2011- Clergy Legacy Award from the Southern Normal High School Founders Day celebration.
2012 and 2016- Elected to serve as a delegate to the A.M.E. Church General Conference.
2016 and 2017- Appointed by Bishop Jeffrey Nathaniel Leath to serve as Presiding Elder (P.E.) for the Kentucky Conference-Lexington District.
2018- 2020- Served as a Special Assistant to Bishop Leath.
P.E. Smith believed we should all live One Day at a Time and his motto was “No Cross, No Crown.”

Arrangements are under the direction of Harrod Brothers Funeral Home & Crematory.