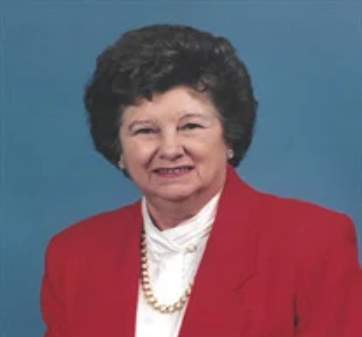 Lona Marjorie Pulliam Barker passed away at her home in Frankfort, Kentucky on June 8, 2021 at the age of 93. Services will be held at Harrod Brothers Funeral Home on Monday, June 14, 2021 at 11:00am. Pastor Scott Nash from Macon, Georgia will be officiating. Visitation will be held on Sunday, June 13, 2021 from 2:00pm to 5:00pm.
Marjorie was born in Frankfort, Kentucky on November 1, 1927 to Averill Bourbon and Susan Irene Herrell Pulliam. She was a child of the Great Depression but nothing stood in her way of achieving her goals in life. Marjorie graduated High School at Bald Knob in 1944 and earned over 2 years of college credit.
Marjorie worked 40 years for the Commonwealth of Kentucky and retired as Branch Manager for Management and Budgeting in the Department of Medicaid. Marjorie proudly represented her state on the National Board of Welfare and Research and Statistics and Chaired the Annual National Workshop in Louisville, Kentucky. Marjorie also received the distinguished Kentucky Colonel certificate for her dedicated service and accomplishments on behalf of others.
Marjorie was a member of Bellpoint Baptist Church. She served as Church Clerk Historian, 50th Anniversary Chairman, and hospitality coordinator. Marjorie also served on the Lebanon Community Cemetery Board for over 45 years.
Marjorie was family oriented and a great cook. She loved spending time with family and took great joy in planning birthday parties and holiday meals. Marjorie became the family genealogist.
Marjorie had a variety of interest, but her favorite was travel. Marjorie travelled all 50 states, Canada, Mexico, Puerto Rico, and most European Countries, including Russia. Cruising took her to the Caribbean Islands, The Mediterranean, Asia and Morocco and Africa. The most fun traveling adventures was when her family could accompany her. Marjorie was also an avid University of Kentucky “Wildcats” Basketball fan and attended many games over the years with her sister Patricia Bryan. In her earlier years, Marjorie, enjoyed bowling.
Marjorie is survived by two sons, Michael Douglas (Deanna) Barker, Sr, and Rodney Guy (Earlene “Scotty”) Barker; two grandchildren, Michael D. Barker, Jr. and Zachary T.K. Barker; four great-grandchildren, Christin Brooke Barker, Stephanie Michelle Barker (Chandler) Adams, Eric Lee Walters and Lakin Paige Walters (Kenneth) Singleton; one great-great grandson Easton Adams, sister, Patricia Bryan, and nephews, John (Debra) Bryan, Lexington, Steve (Valerie) Bryan, Mobile, Al, and Alan (Stephanie) Bryan, Georgetown, and great nieces and nephews, Kaitlin, Olivia, Tyler, Devon and John W. Bryan III.
In addition to her parents, she was preceded in death by her beloved granddaughter, Marsha Ann Barker Walters; a daughter –in-law, Dorothy Lee Pardi Barker; and a one-year old sibling, Agnes B. Pulliam in 1930. Also, grandparents preceding her were John Henry and Vassa Lona Green Herrell (maternal) and Russell Bourbon and Lola Mar Rodgers Pulliam (paternal).
Pallbearers will be Michael D. Barker Jr., Zachery T.K. Barker, Eric Lee Walters, Chandler Adams, John Bryan II and Alan Bryan. Honorary pallbearers will be Christin Barker and Stephanie Barker Adams, Lakin and Kenneth Singleton, Steve Bryan and Patricia Bryan.
Flowers are welcome but memorial donations may be made to Bellpoint Baptist Church, Lebanon Community Cemetery, Shriners Children’s Hospital or Hospice.
Marjorie left a note requesting that the wording from a plaque presented to her on Christmas many years ago be used in her obituary; it reads as follows:
“MOTHER” “Of all the wonders of the world, a Mother’s Love must be one of the greatest of all the Lord’s gifts, for its quality is higher than the highest mountains and its endurance broader than the oceans of the earth. Her love for her children seems to be unconditional and forever lasting, shining through the family tree of life as bright as the sun. Though years pass and days go by with words unspoken, this is to let you know, Mother, our love for You will be unbroken.”
Written by Rodney Barker and presented ‘With Love’ from her sons, Michael and Rodney.