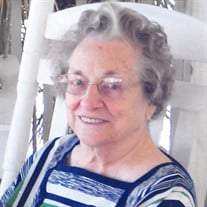 Hazel Penn Smith, 98, passed away peacefully at her home on Monday. She was the daughter of the late Lucien and Goldie Mitchell Penn. A native of Frankfort, she spent her career in the Department of Revenue, Kentucky State Government as a clerk. She was a member of Graefenburg Baptist Church. Survivors include her two sons William (Bernadette) Smith, Louisville and Wayne (Sue) Smith, Frankfort; six grandchildren and nine great grandchildren. She was preceded in death by her husband, Roy Smith. Private services are being planned.