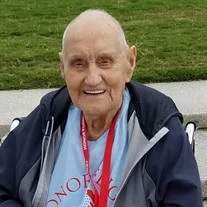 A Celebration of Life service for Mr. Lathrem will be held at North Frankfort Baptist Church on Tuesday, August 20, 2019, at 10:30 a.m. with Rev. David Smith officiating. Burial will follow at Sunset Memorial Gardens. The family will receive friends at Harrod Brothers Funeral Home on Monday, August 19, 2019, from 5:00 p.m. until 8:00 p.m.

Mr. Lathrem was born in Monterey, Kentucky on May 5, 1924, to the late Willie Gayle and Nellie Raisor Lathrem. He proudly served in the US Army during World War II and retired from Vulcan Materials. A beloved child of God, he was a member and deacon of North Frankfort Baptist Church. Gayle was an avid fisherman and loved being in the sunshine.

In addition to his parents, he was preceded in death by a son, Lonnie Lathrem, daughter, Gala Hollon, daughter-in-law, Sue Lathrem, brother, Leonard Lathrem; and stepsons, Ernie King and Dallas King.

In lieu of flowers memorial contributions may be made to Deacon Fund, North Frankfort Baptist Church or WLJC, PO Box Y, Beattyville, Kentucky 41311-2025.