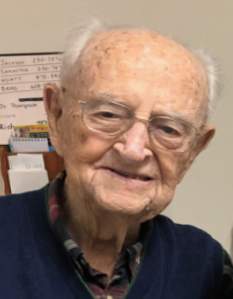 Born the only child to Jean Alma Reinhart Warnock and Eugene C. Warnock Sr. on 4/14/1923. Eugene C. Warnock Jr. passed away in Lexington, KY on Tuesday, May 12, 2020. He was married for 78 years to the love of his life, Christine Barber Warnock. He is survived by his wife; by a son, Gene Towles (Lexington); and by three daughters Susan F. Weesner (George) of Tampa, FL; Roberta A. McCormick of Lexington and Sharie W. Ingram (Brad) also of Lexington. He is also survived by grandchildren Richard and Jerrica Alexander of Owens Cross Roads, AL, Christina White of Lexington and Shanna Hinds(Eric) of Lexington, Adam Ingram of Austin, TX and Jackson, Samantha and Wyatt Ingram of Lexington. He is also survived by sixteen great grandchildren as well as former son-in-law Wayne Alexander of Foley, AL. He faithfully served his country in the US Navy during WWII catching malaria. Before he was well enough to be honorably discharged, he delighted in avoiding the MPs and slipping into the Officer Mess Area for a steak dinner or other fancy meal. Most of his life he was employed as an Operator of large pieces of equipment and could tell you about many roads and buildings he helped create in central KY. After retiring he opened a used car lot on New Circle Road. He loved the art of negotiations and finding a gem of a car at the auction that he could fix up and sell. For many years he was a member of Lone Oak Golf Course in Nicholasville and played golf with his wife for many of his golden years. In addition to his parents he was pre-deceased by his parents in-law, his seven sisters and brothers-in-law and their spouses, as well as daughter-in-law Ann Towles. He had the uncanny ability to stop in a small town and somehow drive straight to the Dairy Queen before GPS devices were even created. A practical joker and dog lover, he will be greatly missed and fondly remembered. A private graveside service will be held at Sunset Memorial Gardens in Frankfort. In lieu of flowers, memorial contributions may be made to the American Heart Association.