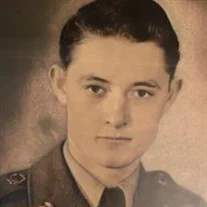 Donald Clifford Penn, age 87, passed away peacefully on Monday, October 4, 2021. Services will be held at Harrod Brothers Funeral Home on Saturday, October 9, 2021, at 11:00 a.m. with Rev. Kyle McDanell officiating. Entombment will follow at Sunset Memorial Gardens. Military Honors will be observed at the gravesite by the VFW Post 4075 Honor Guard. Visitation will be held at Harrod Brothers Funeral Home from 10:00 a.m. until 11:00 a.m. service time on Saturday.
Donald Clifford Penn was born in Frankfort, Kentucky on May 11, 1934, to the late Gorman Thomas Penn and Nellie Mae Watkins Penn. At the age of eighteen, he enlisted in the United States Army and served during the Korean Conflict. He was united in marriage to Etta Lois LeMay Penn on July 3, 1952. They spent over sixty years together until her passing. Mr. Penn retired from IBM where he was employed for over twenty–five years, but his love of drywalling continued many years after retirement. He will always be remembered by his friends and family as an amazing artist and poet. In his spare time, he enjoyed gardening, old cars, and cheering on his University of Kentucky Wildcats and St. Louis Cardinals. He could always be found on his porch swing enjoying the day. But most of all, he loved sharing his stories with his grandchildren and great-grandchildren. Donald will be remembered as a devout Christian and loved serving his Lord. He was a member at East Frankfort Baptist Church.
He is survived by his son, Steven Penn; daughters Donna Goins, Deanna Penn, Dawn Noble (Don), and Christina Riddle (Jay Calcaterra); eleven grandchildren; and six great–grandchildren.
He is preceded in death by his son, David Penn; and his grandson, Jacob Riddle
Serving as Pallbearers will be family and friends.