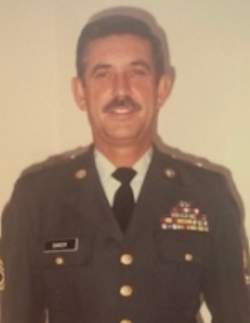 CSM (Ret) Robert A. Baker, 75, of Shelbyville, went home to his Heavenly Father March 23, 2020, after a long battle with cancer. He was born in Frankfort, KY to the late Eugene and Mabel Thompson Baker. He was preceded in death by a grandson, Bradley Hale. He proudly served in the US Army for 27 years and had two tours in Vietnam.
CSM Baker helped establish Reaching Rural Veterans through the serenity Center in 2015. This developed into the Rural Veterans Outreach program with Awake Ministries in building the Veterans Village for homeless Veterans.
He was a member of Shelby Christian Church, a life member of VFW Post 4075, Hiram Lodge #4 F&AM, and the American Legion Post 7.
He is survived by his wife of 27 years, Linda Gunther Baker. His brothers, Gene (Ethel) Baker of Pleasureville, Lyle Baker, Bagdad. Three daughters, Kimber Hale, Murray, Melissa (Kim) Kimbro, Grand Rapids, Wendy (Alan) Hall, Louisville. Two sons, Jim (Cindy), Farmersville, TX, Steve Baker, Louisville. One step son, Daryl B. (Becki) Casey, Frankfort. Eight Grandchildren, two Great Grandchildren and several nieces and nephews.
A special thanks to Hosparus of Louisville for taking such good care of Robert.
A graveside service will be held at a later date at Sunset Memorial Gardens with friends and family invited.
Memorial donations can be made to Awake Ministries, 701 Washington Street, Shelbyville, KY 40065 for the Veterans Village for Homeless Veterans.