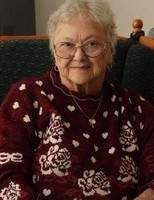 Including her father, Bessie was preceded in death by a brother, William Thomas Fint.

Bessie was a member of the Glensboro Christian Church and the Anderson County Senior Citizens, and was a former cook for Heritage Hall Care Center for over 16 years.

Private services will be observed.  Arrangements are under the direction of the Ritchie & Peach Funeral Home.