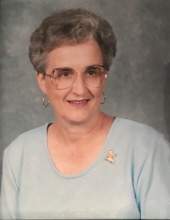 Aleene was born November 25, 1934, to John Garnett Salmon and Zenobia Ray Clark Salmon at Edmonton, Kentucky. She graduated from Campbellsville, Kentucky, High School, and attended Lindsey-Wilson College. She was gifted with a beautiful alto voice and played the piano and accordion. She, her parents and brother, John Philip, composed the Salmon Family Singers, a highly talented musical group who sang and played in evangelistic crusades and various other occasions. In one of those crusades she met Wilbert Maynard Miller, and they were married June 20, 1954. She was a dedicated, glowing Christian who faithfully supported her husband throughout his career in the United Methodist ministry. In her later years, she was a long-time member of the Versailles United Methodist Church, where she participated in the musical program, hospitality program, and others. She possessed masterful secretarial skills by training. In her earlier years she was employed in administration at Louisville Presbyterian Theological Seminary and later as secretary to the chaplain at Methodist- Evangelical Hospital, Louisville. When her husband was appointed Campus Director at the Kentucky Methodist Home for Children, Versailles, she worked in the agency’s administrative office. Subsequently she was employed as a secretary at the Fayette County Health Department. For the last twenty years before her retirement, she served as clerk of the clinical laboratory of the Veterans Administration Medical Center, Lexington, and later as administrative officer of the V.A. nuclear medicine department. Aleene was a devoted wife of 65 years, mother, grandmother, and great- grandmother who enjoyed traveling and camping as her three children were growing up. A superb cook, one of her greatest pleasures was serving sumptuous meals at any time, but especially for frequent family gatherings. She enjoyed reading, music, crossword puzzles, and working in the yard, especially with flowers, and with her husband traveled the United States, Central America, Caribbean, Europe and Middle East. Sharing her husband’s conviction for Christian outreach, she was extensively involved for many years in United Methodist Volunteers-in-Mission ministry building church facilities and providing evangelism, education, health and other services in Mexico, Jamaica, Honduras, Nevis, Belize and Costa Rica. In further expression of their conviction for Christian mission work, she and her husband established many years ago the Miller-Salmon Endowed Scholarship for International Students at Asbury Theological Seminary, initiating and supporting Christian outreach in other countries. During retirement she was a long-time volunteer at the Hope Ministries Clothing Bank, collecting and distributing used clothing to those in need in Woodford County.

In lieu of flowers, contributions may be made to Asbury Theological Seminary, Wilmore, Kentucky, for the Miller-Salmon Scholarship Fund for International Students or to the Building Fund of the Versailles United Methodist Church.